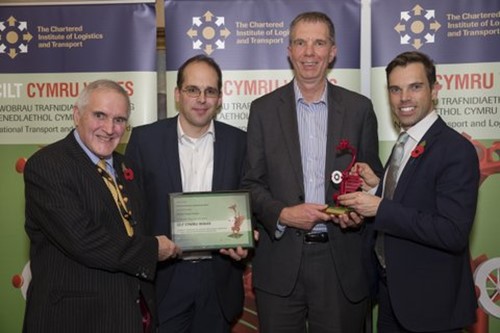 A public transport initiative in South-East Wales aimed at improving bus services has been announced as a winner at the Wales National Transport Awards.

Hosted by the Chartered Institute of Logistics and Transport Cymru, the awards are the only scheme to celebrate the achievements of the Welsh transport and logistics sector, rewarding innovation and best practice found in private businesses, public sector organisations and the achievements made by individuals in the industry.

The South East Wales Bus Funding Project Board won the Passenger Transport Initiative Award, presented by Ken Skates, Welsh Government Minister for Economy and Infrastructure. The winning scheme, a partnership between 10 local authorities and operators in South East Wales, is the first in Wales to have linked the payment of Bus Service Support Grant to the delivery of quality standards designed to improve the region’s bus network and service.

The ground-breaking scheme involves financial payment for each service based on the standard it achieves. It began with a full bus service assessment with passenger surveys, reviewing elements including the age of the vehicle, its emissions level and destination equipment, use of ITSO compliant ticket machines and participation in network ticketing schemes, driver uniforms and disability awareness, complaints policy and availability of service information. Each bus operator was awarded a bronze, silver or gold standard, achieving a payment per kilometre reflecting the standard, with the opportunity to improve over time.

Dr Andrew Potter, Chair of Chartered Institute of Logistics and Transport Cymru Wales, said: “The South East Wales Bus Funding Project Board could have opted for an easy solution but chose to work towards addressing real challenges with a top-down approach. Incorporating the views of multiple stakeholders, they were not afraid to defer until they got it right and were rewarded with success. It’s a template which could be use across Wales and is a deserved winner of a Wales National Transport Awards.”

Charlie Nelson, Chair of South East Wales Bus Funding Project Board and Transportation Manager at Rhondda Cynon Taf Council, said: “I would like to thank all those involved in the project for their support. This award would not have been achieved without the involvement of the local authorities, the bus operators and other stakeholders in south east Wales, who all worked together in partnership to identify, agree upon and deliver a number of tangible passenger benefits that in the last 18 months have enabled standards to be raised incrementally.”