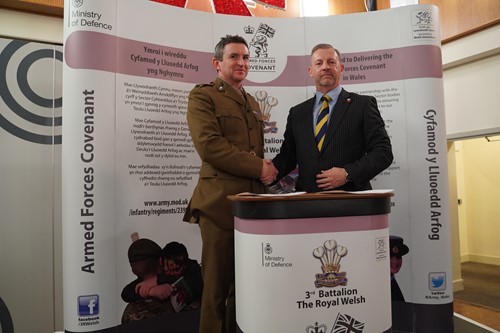 Merthyr Tydfil County Borough Council has pledged its continuing backing of the armed forces locally by re-signing a statement of support.

The local authority first signed the Covenant in 2013. The re-signing was held at Redhouse Cymru and attended by members of all the armed forces, including veterans and ex-service soldiers from the antecedent regiments of the Royal Welsh and county borough councillors from across South Wales. Music was provided by the Regimental Band of The Royal Welsh.

“The pledge recognises the dual respect between the Council, our partner agencies, our communities and our armed forces personnel - serving and retired - and their families,” said Cllr O’Neil.

“The Covenant will be underpinned by the daily work of the Council and its partner agencies to deliver and protect frontline services for those who need them the most,” he added.

“It’s a commitment to ensure the support we offer towards the quality of life of armed forces personnel in Merthyr Tydfil reflects the contribution they make to ours.”

The Council pledges to uphold the principles of the Covenant by:

• promoting the fact it is an armed forces-friendly organisation

• supporting the employment of veterans, ensuring open recruitment practices and advertising via the e-recruitment system

• supporting employees who choose to become members of the reserve forces, by accommodating their training and deployment where possible

Captain Ian Moore MBE, Regimental Operations Support Officer with 3rd Battalion, The Royal Welsh, said: “As the Royal Welsh re-establishes a recruiting presence in Merthyr Tydfil, it’s a mark of the commitment by the Council to acknowledge their support to not only the Royal Welsh, but the whole of the Armed Forces Covenant and its community. Diolch!”