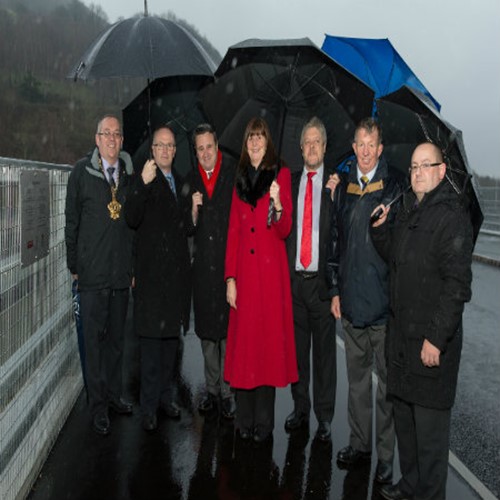 The 14th of December was a significant date in the history of Merthyr Vale and Aberfan with the official opening of Golwg yr Afon, the new highway over the former Merthyr Vale Colliery site connecting Bells Hill, Crescent Street and Nixonville in the south through to the existing roundabout connecting with Aberfan Road and Bronheulog Terrace in the north. Lesley Griffiths , Minister for Communities and Tackling Poverty, officially opened Golwg yr Afon in the presence of His Worship the Mayor Cllr David Isaac, Council Leader Cllr Brendan Toomey and Huw Lewis, AM for Merthyr Tydfil and Rhymney.

Funded jointly by Welsh Government and Merthyr Tydfil County Borough Council, the scheme being completed comprises flood protection, a new and enhanced Household Waste and Recycling Centre (HWRC), a new access road (Golwg yr Afon) and new road and foot bridges that will reconnect the communities of Merthyr Vale and Aberfan.  The new infrastructure opens up the main colliery site for housing development whilst also bringing additional benefits to the community such as a 35% reduction in the Average Annual Flood Damages for the area.

Following unveiling of a plaque on the new road bridge adjacent to Ynysowen Community Primary School and the new HWRC the Minister, Leader, Mayor and Assembly Member joined other councillors, members of the development team and community representatives for speeches and refreshments. Displays about the future development plans for the Riverside site, progress photographs from the construction of Golwg yr Afon by Alun Griffiths (Contractors) Ltd and details of the work of Communities First supported discussions about the further aspirations of Project Riverside with guests learning and sharing experiences and understanding.

Minister for Communities and Tackling Poverty, Lesley Griffiths, said: “I am delighted to have officially opened the Golwg Yr Afon Bridge and the Recycling Centre, which are essential for the communities of Aberfan and Merthyr Vale. This new infrastructure is a significant advance, which will open up the main colliery site for much-needed homes for local families. I am very pleased the Welsh Government has been able to support Project Riverside with funding of £5.7 million thank everyone involved in making this ambitious vision a reality.”

Assembly Member for Merthyr Tydfil & Rhymney, Huw Lewis, said: “The opening of Golwg Yr Afon marks a new chapter for the communities of Aberfan and Merthyr Vale. Having grown up in Aberfan, I can see the remarkable transformation in the area and the benefits that have been brought about thanks to funding from the Welsh Government.

“Regeneration projects such as this are never easy and are often complicated. The success of Golwg Yr Afon is due in no small part to the step-change in leadership at Merthyr Tydfil Council and the active involvement of local councillors Brian Mansbridge and Darren Roberts.

“As the local Assembly Member, I was particularly pleased that the Minister was present to mark the occasion.”

Leader of the Council, Councillor Brendan Toomey ,said: ‘Seeing this site being returned to beneficial use for the community fills me with great pride and the team that has delivered the scheme well ahead of schedule deserve considerable credit.  Ward Councillors Brian Mansbridge, Darren Roberts and I have worked closely to bring this project to reality and we have high hopes that new homes will be built on the site in the near future.’

Just before the official opening of Golwg yr Afon, His Worship the Mayor Councillor David Isaac unveiled a plaque at the foot of a new memorial to the Merthyr Vale Colliery that was at the heart of the community for over 100 years.  The plaque reads:

Sunk by John Nixon from 1869 in Owain’s Riverside Meadow (Ynysowen) on the bank of the Afon Taff the first commercial coal was brought to the surface in 1875.

The colliery finally closed on 25th August 1989 following a long and proud existence punctuated by one of the darkest days in the history of coal mining.

The corners of our memories may be eroded and softened by time but they live on in the local communities first established to house the coal miners of the colliery and their families.

The memorial is located in the centre of the new roundabout at Bells Hill and incorporates a half pit wheel from the old colliery which has been moved from the grounds of Ysgol Rhyd y Grug and a life sized sculpture of a miner looking reflectively towards the river.

The Mayor, Cllr Isaac said: ‘This tribute to the mining heritage of the site is a fitting commemoration of the industry and people that drove the development of this community and will, I am sure, be a great focal point for many years to come. ‘