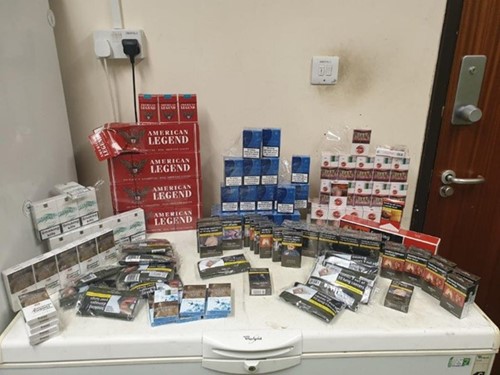 An investigation into the sale of fake cigarettes and tobacco led by Merthyr Tydfil CBC Trading Standards Service led to the prosecution of Mr Alan Gubrail and Mr Shirwan Ahmad at Merthyr Magistrates Court on the 26 November 2020.

The investigation began following a tip off in early 2019 when Trading Standards received information that illegal cigarettes were being sold at half price from a store in Merthyr Tydfil, initially known as Carlos European Mini Market, which subsequently changed its name to the European Mini Market. Undercover test purchases, including an underage test purchase, were made and the cigarettes were found to be fake and not packaged or labelled correctly for the UK market.

This resulted in a warrant being executed at the store and flat upstairs where 3,120 Marlboro, Lambert & Butler and Richmond cigarettes were seized along with 1900g of Amber Leaf and Golden Virginia hand rolling tobacco. These cigarettes and tobacco were counterfeit and many packaged in the old coloured brand labels now banned in the UK. Another 6,860 foreign cigarettes were seized which were not for the UK market and therefore not correctly labelled nor having paid duty.

Mr Gubrail and Mr Ahmad appeared before the judge at Merthyr Tydfil Magistrates Court on 26 November 2020 where both pleaded guilty to offences under the Trade Marks Act and other legislation related to tobacco labelling. The lease for the store and flat were in Mr Gubrail’s name and he admitted to receiving the illegal products and selling them. Mr Ahmad’s lived in the flat above and worked in the store where he readily sold fake cigarettes even when there were genuine ones present.

The judge considered that both defendants were complicit to a greater or lesser degree, in trading in counterfeit cigarettes in a business which aimed to profit by selling illegal merchandise and this was roughly half the market price of genuine products.

Paul Lewis, Head of Protection and Safety Services, said: “This sends a clear message that selling illegal cigarettes will not be tolerated in Merthyr Tydfil. Residents must be aware that no cigarette is good for you, but fake cigarettes contain even higher levels of cancer-causing toxins than standard cigarettes, so people should think twice about buying them. The sale of fake cigarettes also damages legitimate trade, as well as making it easier for children to access them.”

Cllr Geraint Thomas, Portfolio Member for Regeneration and Public Protection, said: “Our Trading Standards team are committed to cracking down on illegal tobacco. Our officers will continue to investigate anyone selling illegal tobacco from either retail or domestic premises and sellers breaking the law face being brought before the courts and facing fines or imprisonment. In appropriate cases we will also use the Proceeds of Crime Act to target the money made by this offending and take the cash out of crime and hit criminals in the pocket.”

Anybody with information regarding the sale of counterfeit products including tobacco and cigarettes can report the matter in confidence via https://www.merthyr.gov.uk/do-it-online/report/general-reporting-form/ or call 0808 223 1133.