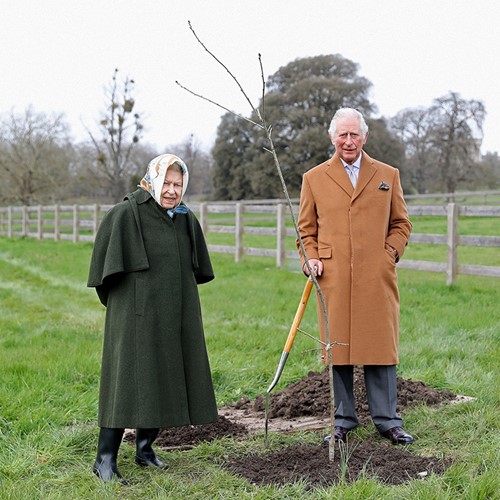 On the last day of the official tree planting season, which runs from October to March, Her Majesty The Queen has sent a message to thank people all over the United Kingdom who have come together to plant over a million Jubilee trees in her name.

With a focus on planting sustainably, Her Majesty’s message marks the halfway point for The Queen’s Green Canopy initiative which spans two official tree planting seasons. Tree planting will commence again in October 2022, through until the end of the Jubilee year.Her Majesty and The Prince of Wales, Patron of the QGC, marked the start of the official planting season for The Queen’s Green Canopy on 1st October 2021, with the planting of a copper beech tree on the Balmoral Estate.

Since then, thousands of families, schools and community groups have come together to plant Jubilee trees across the country to create a canopy of green in The Queen’s name, as a tribute to Her Majesty’s 70 years of service to the Nation.

The projects are proudly showcased on The Queen’s Green Canopy Map, from the stunning Scottish Highlands, to the breath-taking Giant’s Causeway, over to Merthyr Tydfil in the Welsh Valleys, across to Birmingham in the very heart of England, and vibrant urban greening throughout London.

To give people time to upload their planting projects, the QGC Map will close for new submissions at the end of April and will open again at the start of the planting season on 1st October 2022. To bring the first planting season to a close, The Countess of Wessex this morning planted an elm tree in the garden at Buckingham Palace with students from Grange Park Primary in Shropshire. The students were presented with special commemorative Jubilee coins from the Royal Mint, to mark the successful completion of their QGC RFS Junior Forester Award.
https://rfs.org.uk/the-queens-green-canopy-edition-junior-forester-award/

Key achievements for The Queen’s Green Canopy at the halfway point include:
UK Tree Planting – in the first planting season, from October 2021 to March 2022, the
project has inspired over a million trees to be planted.

With The Prince of Wales as its active Patron, the QGC is generating the planting of large celebration trees, new majestic avenues, urban planting and expansive new forests that will benefit generations to come. The QGC is bringing beauty and benefits of trees to areas of need, particularly in urban schools and communities.

The QGC aims to have high quality legacy planting in every county of the UK, with community engagement and best practice at its heart and an emphasis on making a difference in some of the most deprived areas in the UK.

The QGC launched a “Champion Cities” programme to celebrate some of the nation’s outstanding cities which have trees and woodland as a central part of their plans for green spaces. UK cities which have been awarded QGC “Champion” status so far include Aberdeen, Bath, Belfast, Birmingham, Cardiff, Chester, Derby, Edinburgh, Glasgow, Greater Manchester, Leicester, London, Newcastle, Perth, Preston, Southampton, Stoke-on-Trent,
Swansea, Worcester and York.

The QGC is working with schools in every city of the UK and nearly 40,000 primary school children have signed up to the QGC RFS Junior Forester’s Award, which aims to give children and young people of all ages an insight into the skills needed for a career in Forestry, as well as equipping them with the practical ability to assist in woodland management in their schools and local communities.

The Royal Mint is gifting Platinum Jubilee commemorative coins to the first 7,000 children who complete the Award. In addition, the QGC has launched a special training programme to teach unemployed young people new skills in tree planting and management in England and Wales.

Conservation
The QGC will dedicate a UK-wide network of 70 Ancient Woodlands that will demonstrate to the wider public the importance of the UK’s Ancient Woodlands in terms of their natural and social history and ecology. Many of the selected woodlands will also provide a vital source of education for schools and community groups.

The dedication of 70 Ancient Trees for the QGC will be the start of a larger project to propagate material from many of the UK’s most important Ancient Trees, to ensure that their genetic resource is conserved.

In a dynamic and unique way, the QGC has united forestry and environmental groups across the UK behind a common goal: to plant new trees and conserve existing and precious trees – some of which are hundreds of years old.

Background
The Queen’s Green Canopy is a unique tree planting initiative created to mark Her Majesty’s Platinum Jubilee in 2022, which invites people from across the UK to “Plant a Tree for the Jubilee”.

Everyone from individuals to Scout and Girl guiding groups, villages, cities, counties, schools and corporates will be encouraged to play their part to enhance our environment by planting
trees during the official planting season between October to March.

Tree planting will commence again in October 2022, through to the end of the Jubilee year. With a focus on planting sustainably, the QGC will encourage tree planting to create a legacy in honour of The Queen’s leadership of the Nation, which will benefit future generations. As well as inviting the planting of new trees, The Queen’s Green Canopy will dedicate a network of 70 Ancient Woodlands across the United Kingdom and identify 70 Ancient Trees to celebrate Her Majesty’s 70 years of service.

By inviting everyone to plant considerable numbers of new trees throughout the country, the QGC seeks to highlight the significant value of trees and woodlands as nature’s simple but highly effective way to clean the air we breathe, slow the impact of climate change, create important wildlife habitats and improve our general health and wellbeing.

• Throughout Her reign, The Queen has planted more than 1,500 trees all over the
world and has spoken alongside Sir David Attenborough of the importance of trees in
the Earth’s future.
• The QGC is a voluntary and inclusive initiative which is open to participation by
everyone in the UK.
• The QGC is a symbolic gift which involves the voluntary dedication of forests and
woodland – there is no land/title transfer.
• The QGC is a not-for-profit initiative, which has not received Government funding.
Further information about the QGC is available: www.queensgreencanopy.org

The Queen’s Green Canopy Partners Collaboration is central to the QGC. We are proud to work with our partners Cool Earth, The Royal Horticultural Society, The Woodland Trust, Trees for Cities, The Forest Canopy Foundation and DEFRA, The Tree Council, The Conservation Volunteers and Community Forest Trust.

The Queen’s Green Canopy – QGC Friends Network A diverse collection of groups located across the UK, our Friends Network is supporting the QGC, from planting trees to helping inspire the nation to get involved.
https://queensgreencanopy.org/about-us/qgc-friends-network/