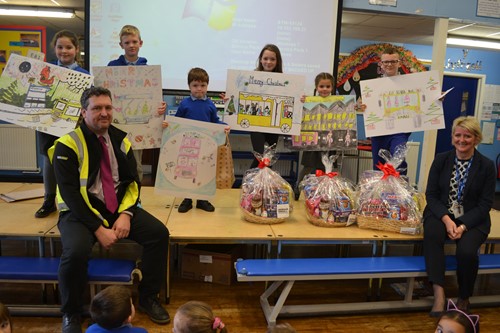 Budding Merthyr Tydfil artists aged as young as five have been showing off their drawing and colouring skills in a competition to produce their school’s Christmas cards.

The work of six pupils at St. Mary’s Catholic Primary School will be featured in a box set of cards produced by Morgan Sindall, the team building the new Merthyr Tydfil bus station which will be directly opposite the school site.

The children were asked by the County Borough Council and Morgan Sindall to design a Christmas card with a link to transport, and came up with ideas featuring sleighs, buses – and even the new bus station itself.

The pupils also received prizes including Christmas hampers for their families, cinema tickets and shopping vouchers.

The cards will be sold by the school to raise money for its nominated charity HCPT Group 102. HCPT (the Hosanna House and Children's Pilgrimage Trust) is a national charity which takes disabled and disadvantaged children and adults on pilgrimages to Lourdes in France.

Group 102 is based in the South Wales valleys and each year takes up to 10 young people from the local community. Often this is the only opportunity they will get to have a holiday, and the week provides essential respite care for their parents.

Morgan Sindall Project Manager Ross Williams said: It’s always great to engage with the local community and schools and to have the opportunity to spread some Christmas cheer with the local authority’s support. The school pupils were excellent, making it hard to choose a winner!”

• The new Merthyr Tydfil bus station is currently being built on the site of the former police station in Swan Street, with an expected completion date of autumn 2020.

Welsh Government has awarded the County Borough Council £10m funding for the station, which will be located closer to the town’s railway station, to complement its significant investment in the Core Valley Lines Rail Network.