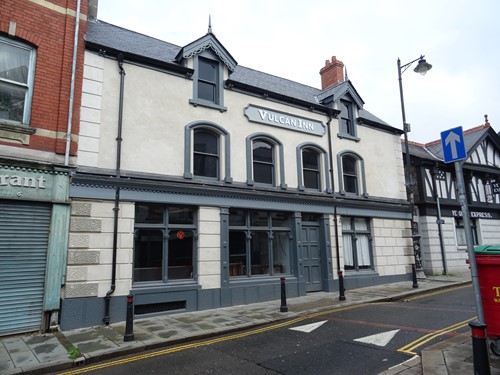 A £2.1m programme to restore some of Merthyr Tydfil’s most historic buildings, while also providing jobs and training in building skills for local people, has seen the completion of its latest project.

The Victorian era Vulcan Inn now looks more like it did in the 1800s after the restoration of early decorative features which were lost when alterations were carried out in recent years, thanks to the County Borough Council’s Pontmorlais Townscape Heritage Quarter, Continuing the Renaissance project.

The public house has undergone a £ 215,600 facelift with match-funding from the National Lottery Heritage Fund (NLHF) towards investment from the Council.

“This project is preserving the unique landscape character of the oldest and most architecturally impressive part of the town centre, protecting or reintroducing the features that make each building special,” said Cabinet Member for Regeneration and Public Protection Cllr Geraint Thomas.

The Vulcan Inn is thought to be early Victorian, as it appears on the 1850s Tithe map of the area - although there is a building with a similar footprint shown on an 1836 OS map, so parts of the existing building could be even older.

The refurbishment work was carried out by local construction company Murphy & Sons. A partnership project between the Council and The Wales National Roof Training Group to provide training in traditional building skills saw three of the company’s employees complete a leadworking course.