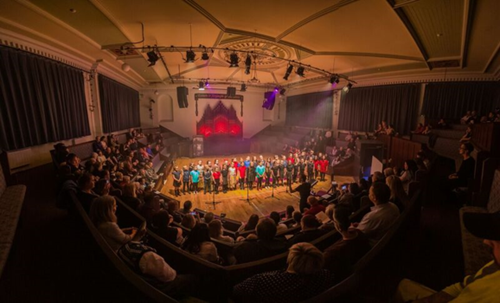 The “vital work” of Theatr Soar in Merthyr Tydfil has been highlighted along with just 14 other groups in brand-new research, commissioned by leading community development charity,Building Communities Trust (BCT) WCVA, Wales Coop, DTA Wales, Coalfields Regeneration Trust, and Planed. Mapping Community Assets in Wales, is a report written by Funding Assist, and showcases Theatr Soar as providing vital services to the community, holding it up as an example of good practice that other groups elsewhere in Wales could emulate.

Published on 25 November, the study maps out, for the very first time, the largely unrecognised work of community groups like Theatr Soar across the whole of Wales. BCT is calling on Welsh Government to recognise and nurture the largely unpaid work of over 400 community groups, and to include it as a vital component in its for Wales.

Theatr Soar is a bilingual community theatre that offers a stage to its community. The Theatr is part of Soar, a Welsh language Centre that is home to all of the Welsh language partners that serve the Merthyr Borough: Dysgu Cymraeg Morgannwg, Urdd Gobaith Cymru, Menter Iaith Merthyr Tudful, Caffi Soar and Siop Lyfrau'r Enfys. Canolfan and Theatr Soar engage with the community through arts and heritage. The purpose and ethos of the organisation is to increase the use of Welsh in the community by improving confidence, wellbeing and inspiring ambition.

Often the lifeblood of towns and villages, the research unveils over 400 community groups, like Theatr  Soar, across Wales that are sustaining the very fabric of Welsh society, saving buildings from falling into disrepute, and providing vital services to locals in times of crisis (like the COVID-19 pandemic and the floods) as well as day-to-day essential services, like transport services, cafes and post offices. This research demonstrates the extent of this work in Wales and its value – estimated to be worth at least £50 million.

Chris Johnes, Chief Executive of BCT, says: “The work of groups like Theatr Soar should not be under-estimated. On the strength of their exemplary work, we are calling on Welsh Government and Local Government to relax their paternalistic instincts, and put faith in local people to know – and do – what is in the best interests of their communities.

“Welsh Government needs to take seriously the role of community groups, like Theatr Soar, in propping up the country’s services, particularly those who have stepped in to take over publicly owned buildings and schemes. Many have been built from the ground up, and are now extraordinarily successful social businesses. Welsh Government needs to nurture community groups and inspire others elsewhere in Wales to follow suit. That’s why we’re calling on the next Welsh Government to put in place a Minister for Communities that will prioritise this work.”

Lisbeth McLean of Theatr Soar says:“We're delighted to be recognised in this research. We have built the organisation up with the love and support of our community. That's the key to our success, the community feels ownership of our buildings, they are part of who we are as an organisation. All communities across Wales need to feel that they have a contribution to make, a voice that needs to be listened to.”

The unique research and map, was launched during an online event, How Strong are Welsh Communities?, on Wednesday 25 November and also outlined BCT’s conversations with over 250 people from grassroots community organisations. Community groups often improve the life chances of residents, particularly older people, children and young people and other vulnerable groups, by: