A new Welsh nursery school opens in the Borough 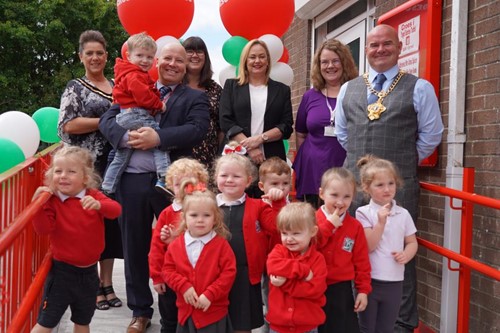 This morning, a school has officially opened in the Gurnos Estate, Merthyr Tydfil called ‘Safle’r Gurnos’ ’ which is currently a satellite provision of Santes Tudful Primary School but will grow into a third Welsh medium school for the County Borough.

This is a big step forward for Merthyr Tydfil in expanding Welsh language education into the North of the County and developing the Welsh language environment. The Council have been working hard for many years to ensure that Welsh language provision and communications are visible across the whole of the Borough, and this is another leap forward in achieving that.

The grand opening event this morning started with ribbons being cut to officially open the new satellite Provision.

Headteacher of Santes Tudful, Mr Gwyndaf Jones, said “Today is a very important day for Welsh Medium Education in Merthyr Tydfil. We are very grateful to the Local Authority for their support in ensuring that we meet the demand for Welsh medium education in Merthyr. We look forward to welcoming more families to the Gurnos Site in the months and years to come. Today is a major step towards realizing the Welsh Government's desire to reach one million Welsh speakers by 2050.”

In attendance, were the newly elected Mayor, Cllr Declan Salmon, Mayors Consort, Cllr Paula Layton, Education Cabinet Member, Cllr Michelle Jones, and Cllr Michelle Symmonds who is now the official Welsh Champion for the Council. Cllr Michelle Symmonds, who has herself championed for Welsh schools in the Borough was very excited for the event and had this to say ‘’This new Welsh Medium school in Merthyr is testament to the Local Authority’s desire to extend its provision of Welsh Medium education and provide the best possible facilities for learners in the area. It will be a huge benefit to the children and young people within the community it serves.’’

Cllr Michelle Jones who was also at the event, said "What a delight it was to attend the opening of Campus Gurnos this morning. Seeing this happen is another step forward in our committed support for Welsh Medium education across the Borough, and an important factor in nurturing children with a first class Welsh language experience. The Council have a clear vision to support the Welsh Government's ambition of a million Welsh speakers by 2050, and this is one way in which Merthyr Tydfil are contributing to achieving that. Ultimately, what I would like to also see in the future is a secondary Welsh language school being established in the Borough"