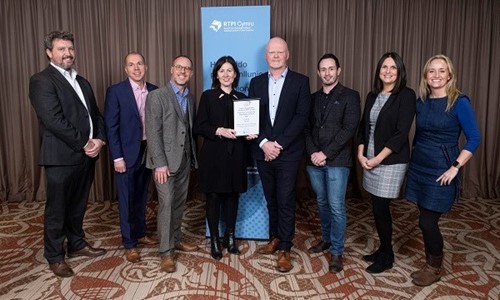 Merthyr Tydfil’s new bus interchange has won a third prestigious national award within the space of as many months.

After picking up two construction awards in the autumn, the bus station was chosen from a shortlist of eight projects as winner of the RTPI Cymru (Royal Town Planning Institute in Wales) Awards for Planning Excellence.

The judges described the interchange as ‘an exemplar project delivering an inclusive approach at design, construction and operational stages that demonstrates how to make a substantive change to how an integrated transport system works.

“The transport Interchange is a state of the art and stunning transport facility that sets itself apart while catering for the public transport needs of Merthyr Tydfil and the region,” they added.

“The building is visually striking and is an innovative celebration of the modern face of public transport: a model for others to follow.”

Funded by Welsh Government, Wales’s first fully electric transport hub is the only one that allows for the charging of electric vehicles on site, has no gas or other fossil fuel supplies and a rainwater harvesting tank for the public toilets.

In recent months, it has won the ‘Sustainability’ category in the 2021 Constructing Excellence in Wales Awards, with the Council also winning the Client of the Year accolade at the 2021 Chartered Institute of Building (CIOB) Awards in London.

The bus interchange was one of eight projects shortlisted by RTPI Cymru described as ‘exceptional examples of how planning and planners have a positive impact on our quality of life in creating exceptional places and protecting our environment’.

“All of this has been done with sustainability at the core, by introducing electrification of public transport and the facility itself, ensuring green renewable energy sources are prioritised, as well as other key environmental features,” they added.

“The approach was an excellent example of meaningful and inclusive engagement and there was a strong planning lead in evidence and included the Design Commission for Wales.”

The award was presented to the Council’s Director of Planning & Neighbourhood Services Judith Jones and representatives of the project’s main contractors Morgan Sindall and Capita.

The bus interchange will now automatically go forward to the RTPI UK awards in London next year.