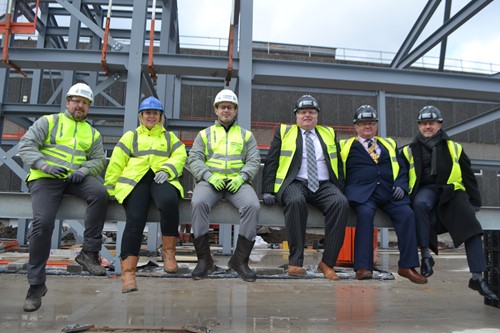 After months of extensive earthworks and ground preparation, Merthyr Tydfil’s new bus station is taking shape with a start on the erection of the building’s structural steel frame.

Leader Cllr Kevin O’Neill, Mayor Cllr Howard Barrett and Cabinet Member for Regeneration and Public Protection Cllr Geraint Thomas, alongside company director Alex Shufflebottom, signed and dated a steel girder which will be a part of the construction.
The structure - the roof profile of which follows the profile of the Brecon Beacons - will comprise 135 tonnes of hot-rolled steel, measuring 80m long and 11.4m high. It will take around six weeks to erect, including flooring and stairs.

Cllr O’Neill said: “It’s great to see the frame going up after a massive earthworks operation, which included installing large concrete foundations. The roofing and structural framing system is the first visible sign of the station, and it was a pleasure and privilege to sign my name as part of a time capsule event.”

Morgan Sindall Project Manager Ross Williams said: “This is the start of a new and exciting phase as we come out of the ground and realise the building so many have been working so hard to achieve. It was excellent to see the people involved being able to 'leave their mark' on the frame to stay forever.”

• The new bus station is being built on the site of the former police station in Swan Street, with an expected completion date of spring next year.

Welsh Government awarded the County Borough Council £10m funding for the station, which will be located closer to the town’s railway station, to complement its significant investment in the Core Valley Lines Rail Network.