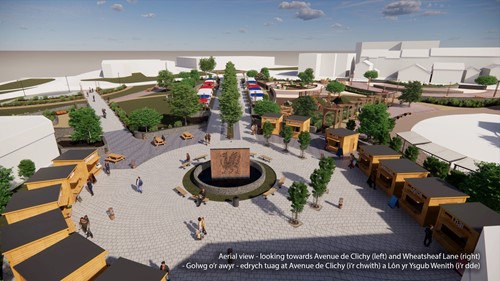 The Council is consulting residents on what they would like to see on the site of the old bus station which closed in June when the new bus interchange at Swan Street opened.

Initial ideas include a street market, permanent food and drink stalls, children’s play areas and multi-use community space.
The site could have a mixture of hard and soft landscaping, designed to look good and be useable all year round.  This could include open, grassed areas, encouraging small scale gatherings - for exercising, studying or picnicking.  There could also be quieter, planted spaces for people to relax in and enjoy the river setting.

All main pedestrian routes would have level access and be suitable for use by wheelchairs and buggies.

The play areas would be designed to be for children ‘of all ages and abilities, with a focus on playing within nature and encouraging activity and co-ordination skills, with apparatus that challenges children physically and offers an element of thrill - for example, timber activity trails, sculpted mounds with climbing and balancing structures’.

There could also be play areas focussing on ‘sensory experiences’, including maze-like paths, planting specially selected for its sensory stimuli, outdoor musical instruments and an accessible sand pit.

The semi-enclosed multi-use community space would resemble a traditional amphitheatre with a raised tier serving as a stage or performance platform.

The area could support a range of community activities, including outdoor theatre or music productions, informal class group learning and perhaps summer cinema screenings.  The space could also be large enough to provide potential overspill support for larger events such as the Merthyr Rising festival.

“Following the opening of the new bus interchange, the Glebelands site needs to be re-purposed and rejuvenated, ,” said Cabinet Member for Regeneration, Transformation and Commercialisation Cllr Geraint Thomas.

“We are keen to hear the views of residents on what they would like to see there, and have developed some initial ideas for discussion. The proposed Central Avenue could serve as a vibrant street marketplace on scheduled days, but also with permanent food and drink stalls,” he added.

“The area would seek to encourage public use and attract people to the area, while the landscaping would be designed to discourage any anti-social behaviour, with the whole area clearly signed and lit.  These initial ideas would add a welcome splash of green to Merthyr Tydfil’s town centre.”

This first engagement event on the plans is running from August 16 for 4 weeks.

With Covid-19 restrictions easing, the Council is resuming its face-to-face public consultations. Venue, time and date for the physical engagement with be confirmed in due course