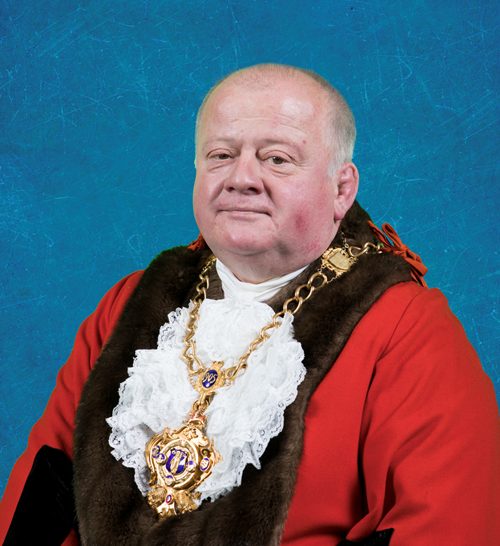 Councillor Howard Barrett was inaugurated as Mayor of the County Borough of Merthyr Tydfil for 2019/20 on Wednesday 15th May 2019.

Howard has represented the Vaynor Electoral Ward since 2008 and lives in Cefn Coed. He has one son Wayne who lives in Australia with his wife and their two children; he also has a granddaughter Darcy who lives in Troedyrhiw, who will be accompanying him on some Mayoral visits as his Consort.

Howard was born in Trefechan and went to Ysgol Y Graig and Vaynor & Penderyn School, he then attended Merthyr Tydfil, Pontypridd and Bridgend College.

Howard worked in Vaynor Quarry for 25 years and lives in Cefn Coed. He is a member of the Vaynor Forum and Pontsticill Community Group.

As First Citizen of Merthyr Tydfil, Councillor Barrett’s duties include chairing full meetings of the Council and representing the Council at formal and ceremonial occasions in the County Borough, regionally, nationally and internationally.  He welcomes visitors to the County Borough and attends and supports events organised by local people and organisations.

This year Howard has selected a charity that has helped him and some of his family members personally; Macmillan Cancer Support, Merthyr Tydfil. All funds raised will go towards the wonderful work already being undertaken by Macmillan at their special Cancer Unit at Prince Charles Hospital.

If you wish to invite the Mayor to an event, then please contact mayoral@merthyr.gov.uk