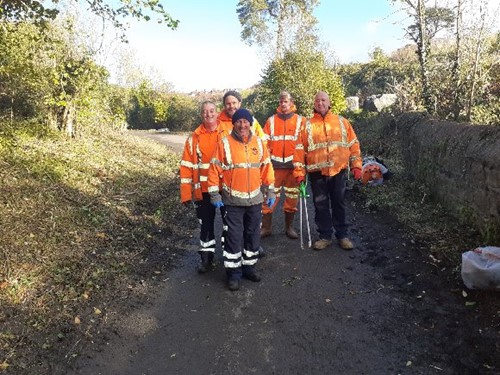 Last week, a 600-manhour weeklong clean-up operation took place around the Goetre Lane area to tidy up the mess that had been caused by fly tippers.

Volunteers from the Gurnos Men’s Project assisted 25 members of council staff from neighbourhood services, street cleansing, grounds maintenance and arbo team on a massive clean-up operation in the area.

Merthyr Valley Homes provided skips for waste removal and issued letters to their residents advising them that there will be a clean-up taking place and asked for their support on the issue, warning that anyone found to be fly tipping could be prosecuted. The whole clean-up operation used 4 large skips provided by MVH and 7 lorry loads of recyclable materials, which included green waste and 253 bags of recyclables, that went to the council’s HWRC site.

Cllr Lee Davies said: “Goitre Lane has been a top priority of mine to clear up for some time. It’s such a lovely walk for residents, to see the level of fly tipping in the lane is upsetting, especially as it’s a route to school for children.

“Gurnos Ward Councillors would like to thank all the Council staff, Merthyr Valleys Homes staff, Gurnos Men’s project and volunteers for all their hard work in clearing the fly tipping. We are looking to set up a Friends of Goitre Lane community group that will work with us to maintain the lane, as well as carry out improvements.”

Cllr David Hughes, Portfolio Member for Neighbourhood Services, said: “This was a huge task and I’d like to congratulate my Ward Councillor colleagues and everyone else who was involved. The before and after pictures speak volumes and your efforts have made a huge difference to the area. Thank you.”

Residents were very happy with the results and were all stopping by the clean-up to thank staff and volunteers. Their hope is that everyone will now endeavour to keep the area clean for the community.