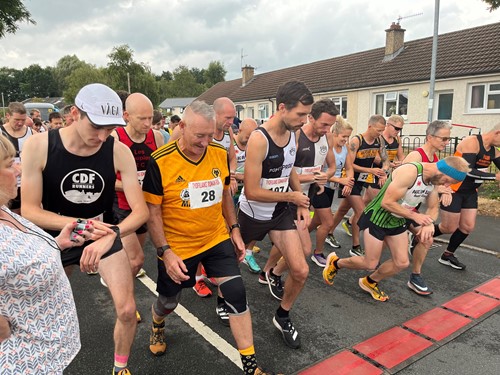 Due to COVID-19, the race was cancelled in 2020 - which would have marked the 40th Anniversary of the event which was restarted in 1980 to commemorate the Martyrdom of Tydfil 1600 years ago, and follows the route between the Forts of the Roman Legions stationed in Wales.

A total 300 registered this year, including some people due to have run in 2020. Eventually, 216 completed the course and the winner was Samuel Jody Richards of Pontypridd Roadents, coming in at 1:40:45, first female was Kelly Bowen coming of Croft Ambrey RC, in at 2:11:03. 1st in the Men’s Masters 40+ was Doug Nicholls of Pontypridd Roadents – who also placed third overall - in 1:48:24, 1st in the Ladies Masters 35+ was Clare Griffiths in 2:25:45. The winning team was Pontypridd Roadents AC, the first local male runner – and fourth overall - was Jonathon Astley of Parc Bryn Bach AC, in 1:48:53, and local female Jennifer Evans of Merthyr RC, in 2:44:08.

The Tydfilians would like to thank the main sponsors for this year’s event, highways infrastructure specialist Redstart.

Comments from some of the runners included: “The event was very well organised, from the buses transporting us all to Brecon, to the Mountain Rescue team being on hand and the friendly police getting us safely around that roundabout.”

“As well as being tough and challenging it was spectacularly stunning and beautiful.”

“All the marshals were fantastic, and the water stations well manned and plentiful.”

“We appreciated the Mayors starting the race and then being there to shake all our hands as we came over the finish line. And all ended with a much appreciated sandwich, coffee and nice t-shirt.”

Mayor of Brecon Cllr David Meredith started the race at 12 noon in Silver Street, Brecon and Merthyr Tydfil Mayor Cllr Declan Sammon and his consort, Cllr Paula Layton, were also there to cheer on the runners and meet them at the finish in Cyfarthfa Park. All the runners received a medal to commemorate the 40th anniversary.

The Mayor and Consort of Merthyr Tydfil would like to express their gratitude to the Tydfilians in organising the event and raising funds for their chosen charities, Cancer Aid Merthyr Tydfil and Merthyr and Cynon Foodbank.

Many thanks also to Brecon Mountain Rescue, Acute Medics for the provision of first aid, and all the volunteers for their invaluable help on the day. Also many thanks to the Westenders volunteers who once again opened up premises in Silver Street, Brecon for registration to take place and who also organised refreshments at the start of the race for the runners.

The Tydfilians are currently looking to recruit new members. If anyone is interested in joining them, please contact the Mayor’s PA Jayne Overbury on 01685 725320, email jayne.overbury@merthyr.gov.uk