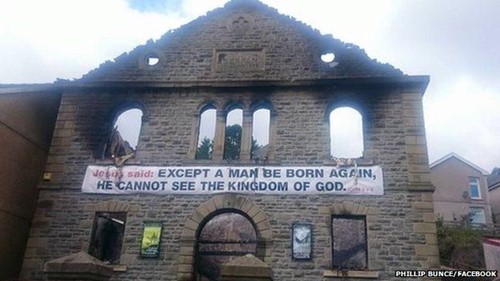 Capel Aberfan has been deemed an ‘immediate threat to the public’ and is to be partially demolished next week.

The chapel was devastated by an arson attack in July 2015 and has been in a state of serious disrepair ever since. At the time Merthyr Vale councillor Darren Roberts said: "This is devastating for the community as it has so much history” and added that the building had been "totally gutted".

After numerous, unsuccessful attempts by the Council to contact the private owners – and with the front elevation bowing and leaning dangerously, putting the building at risk of collapse – these emergency works are necessary to ensure the structure does not pose a risk to any member of the public using the footway and busy road immediately adjacent to it, or the occupiers of the adjacent properties.

Because of the historic significance of the chapel only the first storey of the original structure will be removed to make it safe, and dressing stone will be preserved in case of any future plans to restore the building.

Works will be carried out by contractor ‘Aberdare Demolition’ from Tuesday 18th May 2021 and are expected to last two weeks. Disruption to residents and the public will be kept an absolute minimum.

Councillor David Hughes, Portfolio Member for Neighbourhood Services, said: “Our number one priority is the safety of the public and these works are essential in supporting that.

“Engineers have been monitoring the structure closely and unfortunately there is no other option than to remove the first storey of the building.

“Those undertaking the demolition will ensure that the remainder of the building isn’t damaged further in case of any future restoration.”