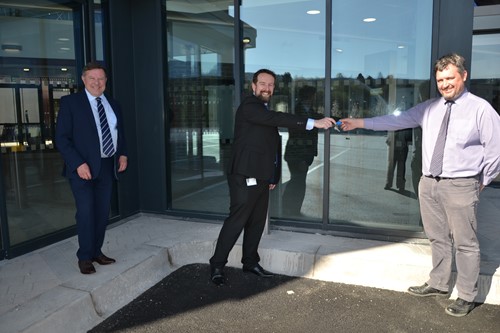 The County Borough Council has been handed the keys to the new Merthyr Tydfil bus interchange by main contractor Morgan Sindall ahead of the building’s opening next month.

All bus services will transfer from the current station in Victoria Street to the new site in Swan Street, which will also feature a base for South Wales Police, independent café Bradleys and takeaway coffee shop Milk & Sugar.  The interchange is then expected to open in mid-May.

Construction work began in July 2019 and was completed in 91 weeks.  The £11m station is fully electric, with plans to build on its carbon reduction performance by also having electrified public transport options.

There is no gas - or other fossil fuel - supply to the bus station.  This means that all the needs of the building - for heating, hot water and so on - are covered by green renewable sources.

The buses are currently diesel, but there is a drive to electrify all of them, and the infrastructure is in place as part of the project.  Taxis are already ‘good to go’, with two electric taxis ready for use and charging stations installed.

“It’s testament to Morgan Sindall that this fit-for-purpose 21st century transport facility has been delivered despite the challenges of the Covid-19 pandemic,” said Ellis Cooper.

“The project was actually delivered with zero snags and on time to the agreed programme,” he added.  “Every pound of Welsh Government funding invested in the station has been reinvested in local suppliers and contractors, with over 95% of the supply chain being based within 25 miles of the site.

“It’s great to see the vision and design of the project completed so well and to the highest standards, and we’re delighted with the results.”

Ross Williams said the contractor was ‘privileged and delighted to achieve the delivery of such a prestigious project for Merthyr Tydfil’.

He added: “Considering the challenges we’ve all faced over the duration of this project, we are all delighted to be able to say we are complete, and thrilled with the final product.

“We look forward to seeing the building being used to its full potential by the residents of and visitors to Merthyr Tydfil for many years to come.”