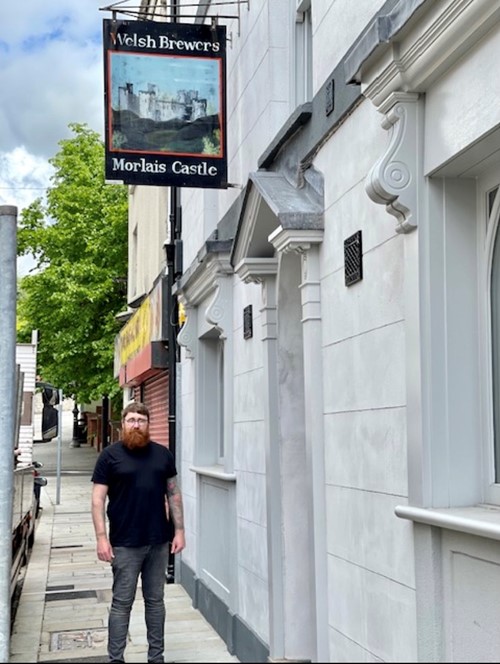 Another historic Merthyr Tydfil pub is reopening after a spectacular transformation, thanks to support from the County Borough Council’s Regeneration Team and two national grants schemes.

The Morlais Castle Inn, which has been closed for more than 20 years, will be offering residential accommodation, indoor and outdoor restaurants, live music and themed evenings for care home residents when it reopens at the weekend.

The building has been bought and redeveloped by local company GTH Developments at a total cost of more than £500,000.  The company received an Urban Centre Living Grant of £250,000 from Welsh Government’s Transforming Towns initiative, and funding of £159,000 from the National Heritage Lottery Fund, with over £100,000 of contributed by the developers.

The redevelopment has seen the first and second floors converted into residential flats with new kitchens and bathrooms, rear car parking, improved access and restoration of the building’s façade, which was in extensive disrepair.

The pub is being leased by a couple with extensive hospitality experience, whose goal was to put something back into the community by reviving an old institution, providing jobs and creating a venue for people of all ages.

Merthyr Tydfil-born Dayle Evans has worked in the hospitality sector all his life.  He once managed the largest pub, restaurant and nightclub in Worcestershire and was responsible for a business that generated a turnover of close to £3m.  Dayle’s partner Kirsty is an experienced pub manager, although currently full-time mum to the couple’s son Noah.

“We wanted to offer Merthyr Tydfil something different,” said Dayle.  “So we created a business plan that consisted of providing local employment and developing a brand that was associated with putting something back into the community, rather than always taking out.”

Dayle said he came up with the idea of themed music evenings for care home residents because both his grandparents recently died with Vascular Dementia, and he had been a carer for them in the final stages.

“With this in mind, I knew that recent evidence suggests that music has been proven to help people dealing with dementia,” he added.  “It’s known that their ability to respond to music is potentially preserved - even in the late or severe stages of dementia when verbal communication may have ceased.”

The building is thought to be early Victorian, appearing in historic images attributed to the 1800s.  But there have been alterations over time, including recent replacement of the roof and windows, and the shopfront and door surrounds evident in historic images have also been lost.

The current refurbishment was carried out under the Pontmorlais Townscape Heritage Scheme, which is restoring the appearance of the historic town centre by reinstating many traditional features such as shopfronts, timber sash windows, traditional renders, natural slate roof coverings and cast iron rainwater goods.

GTH Developments CEO James Howe said that the company saw in the Morlais Castle an ideal opportunity to bring back to life an iconic building which held many fond memories for local residents.  “During the refurbishment work, numerous people would enquire when the building would reopen and relate their stories of when they used the pub,” he added

“We’re a local company who feel it’s important to redevelop buildings in Merthyr Tydfil which also bring revenue into the town.  We use all local businesses and traders, which helps drive the local economy and benefits everyone, providing jobs, tax revenue, and improving the lives of residents.”

Mr Howe said that In addition to the bar and restaurants, the high standard flats would also provide much needed affordable accommodation for the area.

The inn is also the latest project in the County Borough Council’s Meanwhile scheme, which is responsible for much of the current regeneration in the town.

Cabinet Member for Regeneration, Transformation and Commercialisation Cllr Geraint Thomas said: “The Council’s Meanwhile programme, which is linked directly to the overall regeneration of the town centre, is working in collaboration with Tydfil Training to offer innovative support to local businesses taking on property for the first time and/or diversifying into new product/service offerings.

“The regeneration of this property in one of the key locations has added significant value to the redevelopment of the town centre and acted as a catalyst for the Pontmorlais area,” he added.

“We wish GTH Developments and Dayle and Kirsty every success with their exciting new ventures and look forward to the Morlais Castle becoming a very welcome and permanent addition to community life in Merthyr Tydfil.”