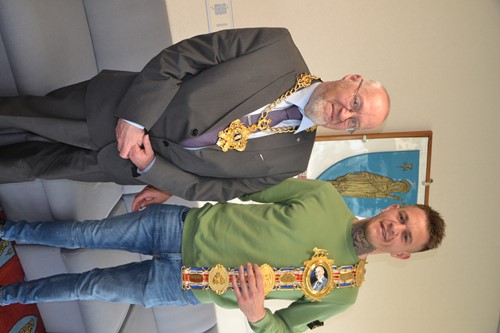 Outgoing Merthyr Tydfil Mayor Cllr Malcolm Colbran had a pleasing end to his pandemic-affected year in office with a visit from our latest homegrown boxing champion.

Malcolm was thrilled to welcome to sign the Mayor’s Parlour guest book new British and Commonwealth lightweight boxing champion Gavin Gwynne, who brought along his Lonsdale and Commonwealth belts for inspection.

32-year-old Gavin secured his first major title in February when he became Commonwealth champion and shorty afterwards beat Luke Willis to bring the vacant British title back to Wales.

Gavin’s not the only champion boxer to grace the Civic Centre Mayor’s Parlour with his signature – in 2009, former world champion Mike Tyson also called in while in Merthyr Tydfil to lay flowers at the statue of his heroes Johnny Owen and Howard Winstone.

Cllr Colbran said: “We have, of course, a wonderful legacy of champion boxers – including Cllr Geraint Thomas’s late father, Eddie.

“But it’s been a few years since the last one, so we’re delighted that Gavin has returned the sport’s spotlight to our county borough and look forward to many more successes for him.”