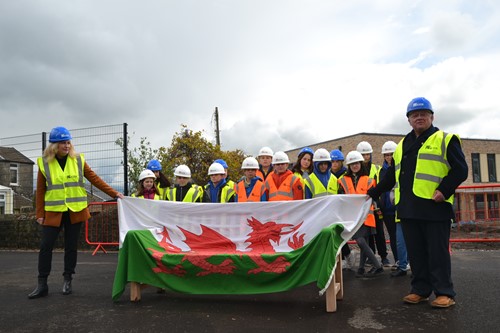 Staff and pupils at the new Ysgol Y Graig Primary School, Cefn Coed, will always remember the school’s late Headteacher Matthew Harries after a bench has been unveiled and a tree planted in his memory.

Later, fellow Cefn Coed ward member and Council Leader Cllr Lisa Mytton and Cllr Barrett performed the official bench unveiling and planting of the tree, a Jubilee Oak that Matthew had been nurturing for the new school.

The new school will replace the existing ageing building with a two-storey state-of-the-art building on the former Vaynor & Penderyn School Site in Cefn Coed.  It is due to be completed in readiness for the new school year in September 2021.

Cllr Barrett said: “I was keen to do something that would not only mark the building of the new school, but also serve as a lasting tribute to a much loved and much missed member of staff, Matthew Harries.”