Are you worried about a child or adult at risk?

Thousands to benefit from Ffos-y-fran funding for sports projects 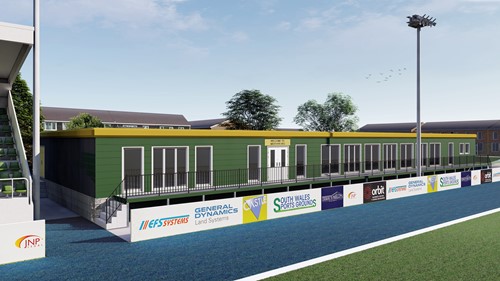 Two Merthyr Tydfil sports projects are to be awarded £420,000 for improvements to facilities that will benefit thousands of people across the county borough.

Merthyr Rugby Club and Treharris Area Community Trust (TACT) will receive the funding from the Ffos-y-fran Large Grant Scheme, the rugby club for the construction of a community hub at its Wern pitch and TACT to upgrade floodlights at its Parc Taf Bargoed football ground.

The community hub is the second phase of Merthyr RFC’s New Shoots: Grassroots project and will provide space not just for rugby but for other local activities and initiatives, with a host of other organisations set to use it.

Merthyr RFC says its main target group will continue to be young men and women, but with increased focus on females and the ambition to recreate a ladies team. It is also exploring the introduction of deaf rugby, Unified (mixed ability) and wheelchair rugby.

“The vision for the club is much bigger and broader than just rugby,” said Merthyr RFC Chair Justin Griffiths. “The hub will contribute to the social and physical wellbeing of the local community by providing a much needed meeting place for social activities on the estate. It also contributes to the wellbeing agenda by the promotion of an active lifestyle, not just through rugby but through other activities as well.”

The project will receive £400,000 towards total costs of £800,000, which will also include car park resurfacing and improved floodlighting.

In Treharris, the project there will receive £20,000 towards the provision of floodlighting on the sportsground at Parc Taf Bargoed. The £500,000 facility, which was previously awarded another Ffos-y-fran grant of more than £200,000, is near completion and includes a spectator stand, changing rooms and a café.

The club currently offers football to almost 200 young boys and girls and also supports a fully bilingual team and coaches. There are plans to encourage more girls to the sport through new approaches such as ‘beatball’, which combines dance, music and football skills.

“The new facility will be a sensitive development that is a first class sporting venue and will encourage locals and visitors to the area to access and appreciate both the facility itself, and Parc Taf Bargoed as a tourist and visitor attraction .,” said Company Secretary Richard Thomas.

The Ffos-y-fran Community Grants Scheme was established by Merthyr Tydfil County Borough Council in collaboration with Merthyr (South Wales) Limited, which donates £1 for every ton of coal sold from the Ffos-y-fran land reclamation scheme. More than £8m has been awarded to a wide range of groups and causes since the site opened in 2007.

“These two projects will provide facilities that will enhance the health, fitness and happiness of people of all ages. Congratulations to the applicants for working so hard on them.”