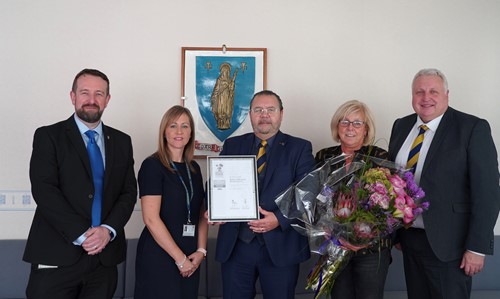 In August the Council was awarded the MoD Silver Award for its Defence Employer Recognition Scheme in acknowledgement of its support to our Serving, Reservist, Veterans and their families within the Armed Forces Community.

And in September, Cyfarthfa High School achieved the Armed Forces Friendly Schools (AFFS) Cymru bronze status, in recognition of the level of support and the range of activities offered to students whose parents are either serving or have served with the British Armed Forces.

Councillor Barry said: “We are extremely proud to have been recognised by these prestigious Awards in expressing our pledge, demonstration and advocacy support to our defence and the Armed Forces Community and our aligned values to the Armed Forces family.

“There are a few names I’d like to mention for their contribution to achieving these awards; at the Council, our Lead Armed Forces Officer, Jayne Overbury; our Armed Forces Liaison Officer, Jamie Ireland; and Organisational Development Officer, Sarah Miles.

“I sincerely thank each and every one of you for your hard work and commitment to this very worthy cause.”