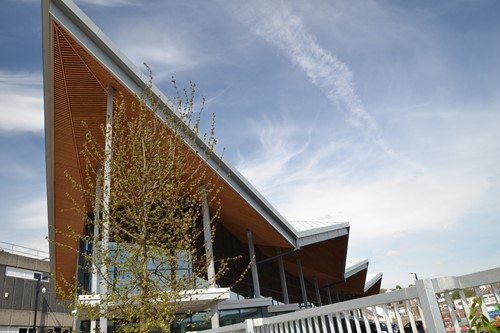 Merthyr Tydfil’s trailblazing new bus interchange is in the running for two national construction awards, only a month after its opening.

The bus station has been shortlisted from almost 100 ‘outstanding’ entries – and in two categories – for the 2021 Constructing Excellence In Wales Awards, to be presented at the Senedd, Cardiff Bay on 23 September.

Wales’s first fully electric transport hub and the only one that allows for the charging of electric vehicles on site, the interchange could come away with recognition both for ‘Sustainability’ and ‘Best Client’.

Along with the project’s green credentials - it also has no gas or other fossil fuel supplies and a rainwater harvesting tank for the public toilets – the County Borough Council was nominated as best client by main contractor Morgan Sindall for its collaborative work.

The Sustainability Award is given for ‘high environmental and climate performance in construction to meet present day needs for housing, working environments and infrastructure without compromising the ability of future generations to meet their own needs in times to come’.

All the building’s heating and hot water is powered by green renewable energy sources, reducing its carbon impact for the whole lifecycle of the building.

Morgan Sindall sourced robust natural materials with long lifespans, and the building was constructed in layers in line with key ‘Circular Economy’ principles, each layer able to be separated and refurbished or replaced.

With the nearby River Taff having many species of birds and notable wildlife including kingfisher and herons, the contractor installed wild bird feeding stations in quieter parts of the site, along with bat roosts across the natural stonework.

Nominating the Council for the Best Client award, Project Manager Ross Williams said: “The proactive and collaborative nature of the local authority has been instrumental in the success of the interchange, exceeding expectations and achieving exceptional results for the Council, end users and partners during the build.

“The enthusiasm and strong relationship that developed between client and contractor drove the desire for innovation and betterment,” he added.  “We linked with multiple authorities, and transport, tourism and regeneration departments to develop links and integrate the project into the authority’s other services and overall plans.”

“A huge 94% of project spend has been placed with businesses in Wales,” he added.  “This was driven at the early stages by the client and end user and every avenue to explore local spend was targeted - not just reviewing local contractors, but also arranging meet the contractor events, selecting local material and reviewing ancillary services like waste carriers - even the milk and fruit man!”

Cabinet Member for Regeneration, Transformation and Commercialisation Cllr Geraint Thomas said: “It comes as no surprise that this spectacular building which is going to be a springboard for the regeneration of the whole of the town centre should be shortlisted for any kinds of awards.

“Morgan Sindall has delivered a high quality, truly green project on time and to budget in the most trying of circumstances.  It’s also great that the Council itself is recognised for all the hard work put in by our Regeneration Team in getting the most out of the opportunity for all concerned.

“The Council must also say a big thanks to Welsh Government for its funding of the interchange to complement its significant investment in the Core Valley Lines Rail Network.”