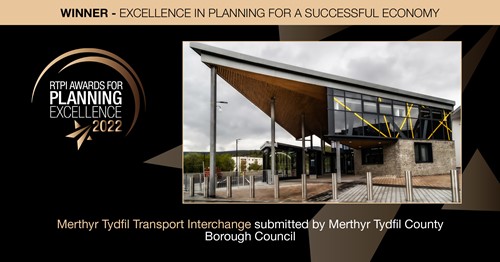 Merthyr Tydfil Bus Interchange has added to its already extensive list of honours with a UK-wide accolade at this year’s prestigious Royal Town Planning Institute (RTPI) Awards for Planning Excellence.

The bus station went one further than in 2021, when it won the RTPI Cymru Excellence in Planning for a Successful Economy Winner, this time collecting the national title.

Making the announcement at the London presentation ceremony, the judges said: “Congratulations to Merthyr Tydfil County Borough Council for its Transport Interchange, with its leading sustainable features and a community-driven delivery.

“This is an ambitious project and secures its future role and connectivity. The bus station roof replicates iconic furnaces of ironworks than once punctured the skyline, which reinforces its sense of place.”

Funded by Welsh Government, Wales’s first fully electric transport hub is the only one that will allow for the charging of electric vehicles on site, has no gas or other fossil fuel supplies and a rainwater harvesting tank for the public toilets.  This award is the sixth it has won in the past 18 months.

The Council’s Director of Planning & Neighbourhood Services Judith Jones said: “We’re thrilled, on behalf of the local authority and main contractors Morgan Sindall and Capita Redstart, to have gone one better than last year and beaten off the challenge of entries from across the UK.”

Council Leader Cllr Geraint Thomas said: “The bus station has won just about every award it’s been nominated for since its construction. The judges commented that the quality of entries in this year’s awards was outstanding, so to win on such a national stage is even more impressive.”