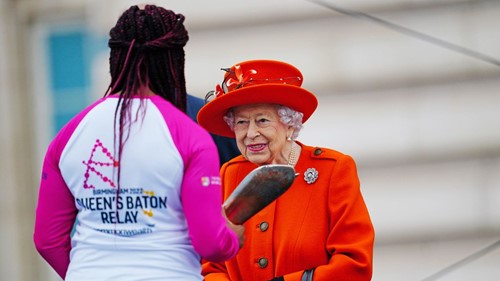 Preceding the games is the Queen’s Baton Relay. This is a relay around the world held prior to the beginning of the Commonwealth Games. The Baton carries a message from the Head of the Commonwealth, currently Queen Elizabeth II. The Relay traditionally begins at Buckingham Palace in London where the Queen entrusts the baton to the first relay runner.

At the opening ceremony of the Games, the final relay runner hands the baton back to the Queen or her representative, who reads the message aloud to officially open the Games. On 7 October 2021, at a special event at Buckingham Palace, Her Majesty the Queen placed her message into the Baton, signifying the start of the 294-day Relay to the 72 nations and territories of the Commonwealth.

As part of the Welsh leg of the relay the Baton will pass through Merthyr Tydfil on the afternoon of Saturday 2 July.  The Baton will travel in a procession along the Taff Trail, starting at Aberfan Community Centre before finishing outside Merthyr Tydfil Leisure Centre, where there will be some free sporting activities on offer.  Further details and times will be shared nearer to the event.

Ellis Cooper, Chief Executive of Merthyr Tydfil County Borough Council, said: “I’m immensely proud that the Queen’s Baton Relay will pass through Merthyr Tydfil as part of its official journey.  Merthyr Tydfil has a rich sporting heritage and we have seen athletes compete for Wales in the games as recently as 2018.

"We have a fantastic network of sport and physical activity providers across the county borough, who support Merthyr Tydfil residents to be healthy and active.  We also have amazing volunteers and activists who do so much to support their local community, and it’s great that we will be able to showcase some of these people as part of the event also.”

Each leg of the Queen’s Baton relay features Baton Bearers, who carry the Baton along its journey. Baton bearers are local people who have inspired others, made an impact in their community or are representative of the values of the Commonwealth Games.

We are now looking to the Merthyr Tydfil community to nominate Baton Bearers for this event.  These bearers will wear official Queen’s Baton relay uniform and will carry the Baton as part of the procession in July. The Welsh criteria for nominations are below.

Nominations are open from today (23 March 2022) and close on April 30. You can make a nomination here - https://www.merthyr.gov.uk/do-it-online/request-or-apply/commonwealth-games-2022-queens-baton-relay-bearer-nomination/?lang=en-GB&

So if you know someone who deserves recognition, nominate them now and showcase the fantastic people of Merthyr Tydfil.