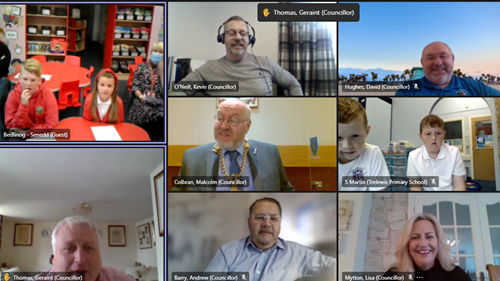 Jacob, Rhys, Charlie, and Lacey questioned Cabinet members on environmental issues in their school area and pressed for answers on what could be done. The meeting also involved a question-and-answer session asking the Councillors about their roles and what it entails.

Cllr Malcolm Colbran, Mayor of Merthyr Tydfil and Bedlinog Councillor, said: “I think it's very important for Councillors to engage with young people and listen to their opinions so myself and members of the MTCBC Cabinet recently held a virtual meeting with members of both Bedlinog & Trelewis School Councils.”

“I could tell that the pupils had put a lot of work into their research, and they asked us some excellent questions. We all thoroughly enjoyed the meeting, and it was fantastic to see the students taking such a keen interest in local affairs.”

Issues were raised by Trelewis Primary School regarding the litter affecting a nearby stream which the children must cross to get to school. Also, Bedlinog Primary School spoke about issues on their route to school such as broken fences and dog mess.

Cllr David Hughes, Cabinet Member for Neighbourhood Services, Planning and Countryside, said: “he would be meeting with the chief officer to speak about potentially putting a safe pathway in this area and would also do everything he can to deal with the litter problem.”

Deputy Leader Cllr Geraint Thomas, Cabinet Member for Regeneration, Transformation and Commercialisation, said: “he would work closely with Cllr Hughes in trying to get a safe route to school and was hopeful it was something they could solve between them.”

The Councillors in the meeting were very impressed with the quality of questions asked by the children and strongly agreed that the pupils had every right to speak about these issues, and agreed an urgent visit would be needed.

Cllr Lisa Mytton, Council Leader and Cabinet Member for Education, said: “I really love and welcome the chance to talk to our school councils and the children really put us on the spot asking some of the toughest questions. it’s an enjoyable part of the role and allows us the opportunity to take on board their requests and hopefully act because of the meetings”

The virtual meeting was an excellent experience for the students to learn about how the council works, but also allowed the Councillors to understand the issues better by listening to these pupils’ experiences.