Then and now: Merthyr Tydfil’s iconic Milbourne Chambers building through the decades 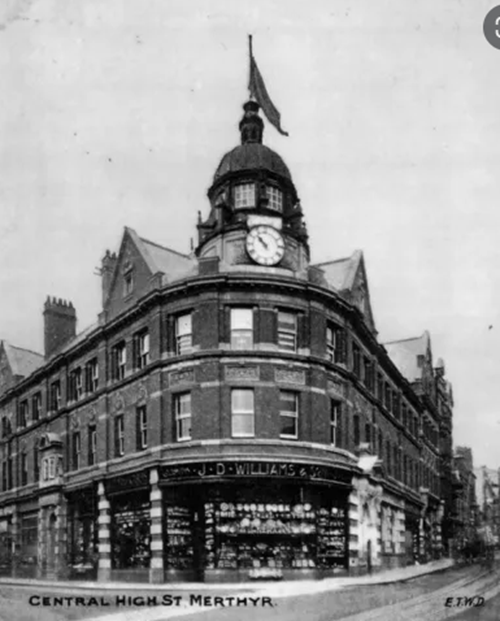 The Milbourne Chambers building — regularly referred to by locals as ‘Samuel’s Corner’ due to jeweller H Samuel’s long-standing residence in the building — is one of Merthyr Tydfil town centre’s most iconic structures.

And in November 2022, the Victorian building has become home to one of its most exciting business ventures yet, with the arrival of Italian restaurant Casa Bianca.

The much-loved Welsh chain will soon occupy the historic building on the corner of Glebeland Street and High Street — bringing a taste of southern Italy to the heart of Merthyr Tydfil.

To mark this new culinary chapter, here is a snapshot of the Milbourne Chambers building through the decades…

The building and associated land were originally owned by Merthyr Tydfil’s first postmaster, William Milbourne Davies. Due to its dilapidated state, it was rebuilt and transformed by his ancestors into the building that stands today — named ‘Milbourne Chambers’ in his honour.

Home to Merthyr Tydfil’s main Post Office, the building was a key part of the town’s bustling community, providing multiple services. A new block was built to the side of the post office — the upper section used for living accommodation and grandly appointed offices. Towards the rear of the building were workshops used for manufacturing and repairing watches and jewellery, foreshadowing the building’s next purpose.

In 1903, after 30 years of serving the community, the Post Office relocated to a new building on John Street, leaving the magnificent building open to buyers.

The premises has strong associations with the jewellery trade, becoming home to not one, but two of Wales’ most popular jewellers — starting with JD Williams.

JD Williams was a high-class jewellery and watch retailer, founded by Merthyr Tydfil-born James David Williams. Having apprenticed as an ironmonger and travelled around the UK learning his trade, he returned to Merthyr Tydfil to open his own shop.

After James’s sudden death, the business was taken over by his son, Frederick Carlyle Williams, who continued to run the business under his father’s name and moved it to its new premises at Milbourne Chambers.

The iconic clock was erected on top of the building, which faces Lower High Street, to advertise the new jewellery business and celebrate the announcement of the new County Borough status of Merthyr Tydfil — which became official in 1908. This was a momentous occasion for the town, now separated from its former county, Glamorgan, with the freedom to govern itself independently.

The combination of the heavy copper name plate above the door and the grand clock made the building quite the spectacle — with the iconic clock still one of the town’s most memorable features today.

In 1907, JD Williams was sold to another jeweller, H Samuel. Owner Walter Samuel began trading in 1890 in Preston, but soon started expanding his empire across England and Wales.

The business merger proved so popular with local people that the business continued to trade under both names in Merthyr Tydfil for over 90 years.

H Samuel served as the town’s favourite jewellers until 1999, when they relocated both branches from High Street to new premises at 6 Graham Way in St Tydfil’s Shopping Centre in Merthyr Tydfil — where it still stands today.

The building was then taken over by the established hair and beauty salon, Ladybirds, which served the community’s beauty needs from the building for 13 years.

The family-run salon business, Ladybirds Hair Centre, was founded in 1972 and is now owned by Paula Crimmings, who took over from her mother.

In 2013, they made the decision to relocate to a new premises on Swan Street in Merthyr Tydfil, where they will this year be celebrating 50 years of serving the community.

Once opened, Casa Bianca will be the third establishment in restaurateur Andreas Christou’s small Welsh empire — with his Pontypridd and Abergavenny venues proving extremely popular with diners across South Wales.

The Merthyr Tydfil venue is expected to remain equally as visually impactful, complete with olive trees growing from the ceiling — providing a dramatic canopy for customers to dine beneath.

Made possible by an investment from the Welsh Government’s Transforming Towns Placemaking scheme, delivered in conjunction with Merthyr Tydfil County Borough Council, the new venture is expected to follow successfully in the footsteps of this iconic structure’s predecessors.

Leader Cllr Geraint Thomas said: “The Council is thrilled to have a restaurant the calibre of Casa Bianca opening in the heart of the town centre.  Not only is it fantastic to see this wonderful old building glowing with life again, but also to see new jobs created for local people, and an exciting new menu added to the growing offer for local and visiting diners.”